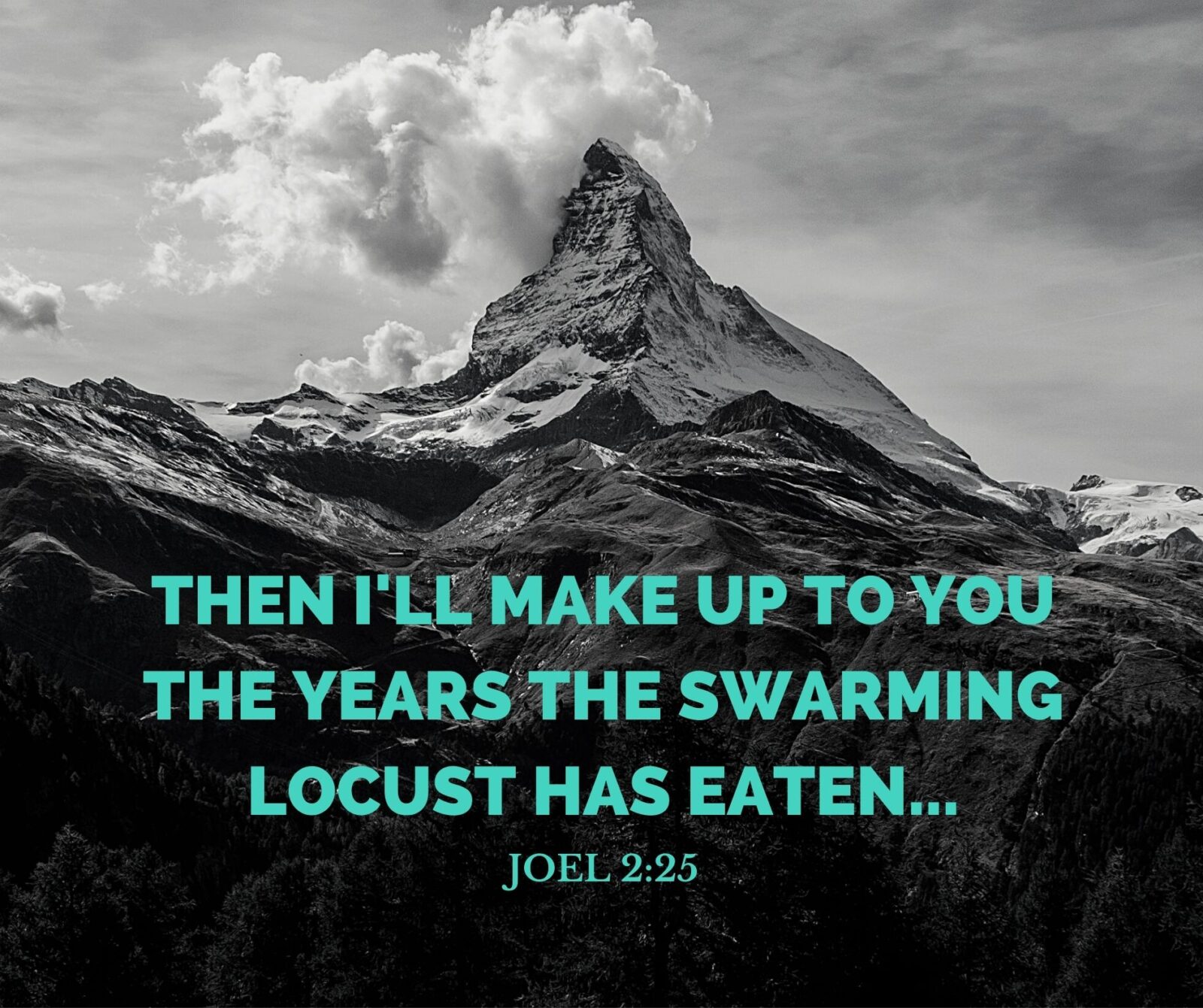 Some highlights of this chapter - The first part of this chapter is describing a locust infection on the land. They are so numerous, they sound like chariots of horses. The destruction - beyond comprehension. By verse 12 and 13, the Lord pleads with His people to turn to Him, and, rather than just having outward signs of pain, grief and repentance (tearing of the garment), He wants them to render their hearts. He reminds them that He is slow to anger, compassionate, and abounding in lovingkindness. Throughout the remainder of the chapter, God's promise of the Spirit and deliverance is poured out onto the pages. "Then I will make up to you for the years the swarming locust has eaten..." (verse 25).

Healing is rarely "one and done" after we experience significant loss or trauma. I don't mean we can never have freedom (we can and I do), but we developed survival techniques that follow us and surface through the entirety of our lives. If not confronted, these survival skills or our natural instincts can produce sin which ultimately cause more pain.

What do I mean by sin? First I have a disclaimer - talking about our sin is not to bring more shame upon those of us suffering from loss and trauma. You don't need that. I don't need that. I'm bringing this up because if we don't recognize it, it's impossible to remove it. Such a topic feels best brought up between those of us who are mutually suffering because those who are not suffering hesitate to talk to us about it out of empathy, or, if they do talk to us about it, it can sound judgmental or cliché.

One prominent temptation of grief and/or the trauma journey is to produce idols - idols of safety, security, control, fantasy, pleasure, self-pity, etc. These things may have played a critical role in surviving our experiences; one of my clients recently described the fantasy land she developed while abused as a child, but now, as an adult, she remains in fantasy land to avoid conflict and relationship building. When our survival tactics stick around long-term, and we make decisions based on them rather than on truth, they become idols. Examples of what these idols may look like years after our loss or trauma:

Each of these examples is understandable; the hurt each person endured birthed a response and a desire to self-protect, but to continue living this way results in rejecting gifts from God and leads to relying on self more than God. We think we are self-protecting, but we are placing ourselves in prison's walls, often passing these walls down to the next generation.

Active memories of loss or trauma are not the most prevalent indicators of whether we are living in freedom from it - I believe the presence or lack of idols may be the greatest indicator, which can be revealed in the health of our relationships and connections with God, ourselves and others. The memories and pain of loss or trauma do not have to be absent in order to experience freedom from it, but creating idols of self-sufficiency and protection prolongs our suffering and debilitates our relationships.

We are currently in the Lenten season, which is the perfect platform for transitioning from idols to freedom.

Lent is a 40 day season leading up to Easter in which many Christians examine our hearts, repent of sin, turn to God, reflect on the suffering our Savior endured to accomplish our salvation, and finally, rest in the assurance of that salvation. Some choose to fast from a certain food, drink, technology, or activity during these 40 days as denying usual comforts is a means of deepening our sense of union with Jesus and reorienting our lives around the things of God.

We give up that which distracts and entangles because we want to experience our joy and freedom in Christ. Forty exhilarating days of immersing ourselves into this grand story increases our appreciation and love for Jesus, and it ends with a wonderful finale celebration. Exhilarating is hardly the word most use to describe lent; some even avoid the observance because, even though the finale is grand, the process itself can be monotonous and challenging... maybe even a little depressing to thinking about Jesus' suffering over and over.

But the process observed during lent becomes the lifestyle of those of us who claim Christ and have experienced significant loss and trauma. We observe/recognize the idol, we repent, turn to God to reflect on His goodness and plan for restoration, and we celebrate. While the general Christian population chooses usual comforts for "fasting" or doing without, we must choose to fast from habits that once saved our lives. In releasing these protective idols, we feel naked and vulnerable - sound like anyone else you know that suffered on our behalf? With each step of vulnerability we chisel the walls the devil was so proud to help build!

We don't experience victory at the end of this process... this process comes from a place of victory! Rather than the enemy being allowed to use our pain against us, we are allowing God to use it to build us up.

In some strange way, I'm okay with the fact that I may be dealing with this "stuff" for the rest of my life because every time I become aware of it and I enter into this process - I am left with a feeling of awe and wonder regarding the power of my Savior. Did you know that before Ron and I were married, we took a premarital survey that showed sexual intimacy as our highest risk area because of my past sexual abuse? That survey was spot on - my pain and idols (and Ron's response to those things) infiltrated the early years of our marriage. Just a few weeks ago, we took the same type of survey again (by the same organization, but this time it was for married couples), and guess what our greatest area of strength was? Sexual intimacy! That didn't come from sheer will power. That didn't come from ignoring it. That didn't come from me shutting my husband out. That came from years of going through this "Lenten-style" process, from a place of victory, over and over... and it was so worth it.

During lent, the celebration comes after 40 days... but for us, I think we should throw the celebration on day 1 because we already know the end result - God will restore the years the locusts have eaten.

What "idol-release" party are you going to throw today?

4 thoughts on “Locusts and Lent”